The importance of target engagement studies

Key to the target validation process and improving clinical attrition is testing the biological hypothesis. It is important to establish if a lack of efficacy is due to the compound not engaging with the intended target or alternatively, engaging with the target but the target not modifying the disease pathway. Achieving this in a cellular context is an important step in mechanistic validation.

Cellular target engagement models the complexity of the cell environment compared to studies in isolated protein or protein domain approaches. Achieving this for intracellular targets can be more challenging compared to targets located on the cell surface and can be exemplified by 3 broad categories:

CETSA relies on the stabilising effect that small molecule binding can confer on the structural confirmation of its target. When the target protein is subjected to a heat pulse, the ligand-bound form will unfold at a higher temperature compared to the unbound form, generating a shift in what is known as the melt curve. A variety of detection methods can be applied to readout this difference caused by ligand-induced stabilisation, ranging from Western blot and antibody-based detection through to mass spectrometry-based proteomics. It should be noted that CETSA can give false negative results for compounds that genuinely bind the target but do not lead to a thermal stabilisation, however, it is a flexible approach that may have minimal reagent requirements.

BRET is a cell-based assay that utilises a luciferase enzyme tag and a fluorescent tracer ligand. While similar to fluorescence resonance energy transfer (FRET), BRET has the advantage of improved signal due to the absence of widefield illumination with the luciferase tag producing the donor emission. Compound binding is detected by displacement of the tracer and decrease of the BRET signal, allowing the binding of the compound to be followed in real time. It is one of the few techniques allowing intracellular residence times to be measured, which may provide an additional avenue to improving drug efficacy and safety profiles.

Demonstrating modulation of the disease-relevant pathway often involves validating proximal markers downstream of the target. Ideally, these markers are specific to the desired interaction between ligand and intended target, and well validated. At  MDC, we offer highly-sensitive detection of peptide and proteins using platforms such as QuanterixTM single molecule array Simoa® platform and advanced microscopy. In addition, global tissue analysis such as Nanostring GeoMxTM digital spatial profiler and mass spectrometry imaging.

Target engagement should demonstrate the ligand reaches its site of action, confirm the ligand-target interaction and its mechanism, and identify and measure proximal markers that can report on the modulation of the disease pathway. This concept of target engagement carries through all the way from in vitro cascades in early discovery to the use of proof of mechanism biomarkers to inform outcome in clinical trials.

This article is based on Matthew’s talk from the MDC Connects webinar series. Watch the session Matthew took part in – Target Validation and Efficacy: 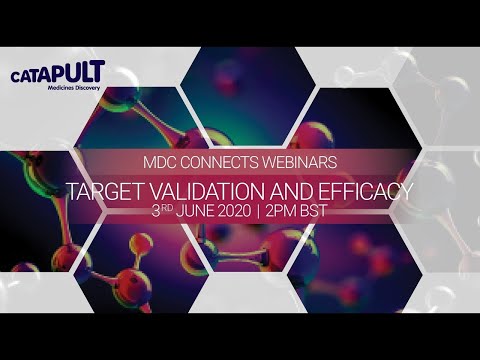 Matthew Burnham is a Lead Scientist at MDC. He has expertise in drug discovery with 9 years previous experience at AstraZeneca in both the Mechanistic Biology and Profiling Department and the Safety Screening Centre, developing and validating cellular assays for drug efficacy studies and building understanding for predictive in vitro toxicology. Previously in academia, he specialised in elucidation of complex molecular pathways and electrophysiology of vascular biology as a BHF investigator.

Read about our latest partnership between @UniofOxford, @EarlhamInst, @biogen & @Boehringer to investigate a new drug target for the treatment of #schizophrenia 🤝

This is the first project to be funded by our Psychiatry Consortium, a £4m collaboration ⬇️
http://ow.ly/PlVQ50DQ78u

Our CIO, @johnpoverington is speaking at the @BritToxSoc Congress 2021 - Continuing Education Program session.

This session will cover #COVID19 repurposing therapies and vaccines. Register your place 👇
http://ow.ly/91Dg50DQ7yK

A big CONGRATULATIONS to @BioAscent, a member of our CRO network👏👏!

BioAscent has been named as the fastest-growing pharma outsourcing business in the Alantra Pharma Fast 50.

Take a read of the article in @PharmaTimes 📖👇
http://ow.ly/XdGZ50DQ5Nk #pharmafast50